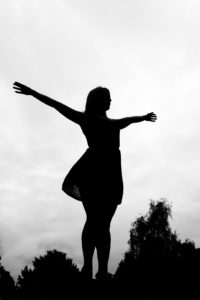 I teach dance and recently I was teaching my students to perform a certain special partner skill which required them to steady one another thus preventing a fall in a very literal way. They were learning to trust others as they unconditionally supported one another without complaint. Do you steady or uphold others in a figurative and literal way? Are you able to look outside of yourself and support others without complaint? I believe that believers in Christ should have radical love for one another and that this love will impact others for Christ. In John 13:35 Jesus said, “By this all people will know that you are my disciples, if you have love for one another.” A great example of how to love and support one another is found in the Old Testament in Exodus 17. Moses had led God’s chosen people out of the bondage of slavery in Egypt and then he had struck a rock to make water appear in order to quench the thirst of the quarreling crowd. Soon thereafter we find Moses climbing to the top of a hill with the staff of God while Aaron and Hur obediently climb with him. Amalek was attacking Israel and Moses was to hold up his arms and God’s staff during the battle in order to make Israel prevail. Exodus 17:11-12
“ 11 Whenever Moses held up his hand, Israel prevailed, and whenever he lowered his hand, Amalek prevailed. 12 But Moses’ hands grew weary, so they took a stone and put it under him, and he sat on it, while Aaron and Hur held up his hands, one on one side, and the other on the other side. So his hands were steady until the going down of the sun.” Aaron and Hur were upholding Moses’ arms while the battle raged on. Girls let’s face it– holding up someone’s arms often means smelling their armpits. (Moses did not have deodorant I presume.) Are you the person who will hold up a sister when the stench of their situation makes you want to run away? We would often much rather admire each other from afar detached from emotions and the battles that our sisters are facing. We are unable to uphold one another because we are paralyzed from the lack of authenticity. Are you an Aaron or a Hur? Be a person that finds Hearts to Bless this week. Be authentic. Be sincere. Listen. Hold one another up even if it stinks. Wear nose plugs if you must, but be available. Be hospitable. Aaron and Hur upheld Moses’ arms after they gave him a stone to sit upon. Tell a sister to pull up a stone, or a stained couch at your house, or even the corner table at the local coffee house while you uphold them in prayer. Don’t scream “Jesus loves you” from afar as you are too busy in even your religious activities to look around and see arms that need upholding. Uphold one another sweet sister and be amazed at the beautiful way in which God will utilize your life to shine His light to others. Keep on steadying others sweet sister with the radical love of Christ.